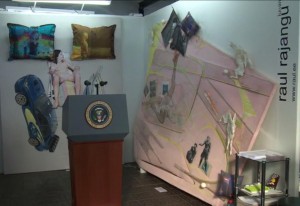 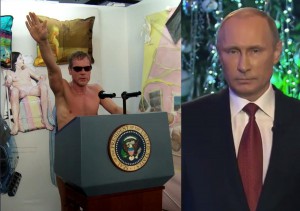 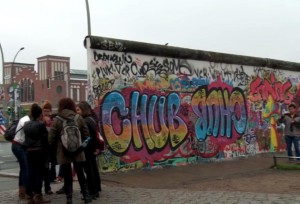 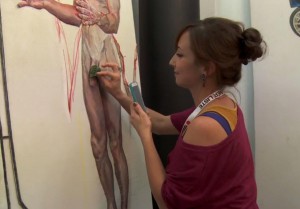 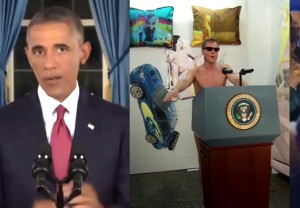 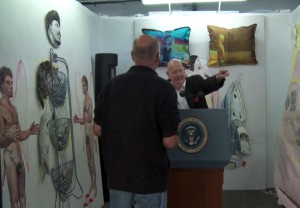 Like in last year`s BERLINER LISTE 2013, where the audience of the Bedrooms` Show had an opportunity to wriggle around in the Coca-Cola bed with nice naked models, a liberty enjoyed by many – we today have the liberty and obligation to not only see but to participate in the design, (re )production and hijacking of aesthetisized political processes and mythologies.

Of course – and this unique opportunity is offered in Rajangu`s booth at BERLINER LISTE 2014.

Despite clear political connotations – direct and not overly direct references to global political supermodels, both (still) living and (already) dead, killed or suicidees – it is clear that Rajangu is interested in both aesthetizing politics and politicizing aesthetics to such a degree that each spectator can privately decide which of the two is presented – Rajangu does not make imperative prescriptions. Instead, he elegantly announces: What is matter? Never mind. What is mind? It doesn`t matter! He charmingly leaves the customer with ambivalence, not even aspiring to be the regime`s pathological anatomist who would sell us a cheap and customer-friendly metaphysical painkiller.
This not unexpected – we can recall that, throughout his career, Rajangu has been keen to (re-)use – what a lovely Grünepunkt! -, twist and of course mock/taunt all kinds of massive, total and fossilized aesthetical, moral, therapeutic and metaphysical schemes and systems, our entire strikingly paternalistic, sexist and misogynous paranoia.

Warning! No responsibility for loss caused to any individual or organization acting on or refraining from action as a result of the material in this exposition can be accepted by Luminoso Entertainment Group, Inc. or Rajangu.